CLSI teaches us that it is important to know the difference between a “true” quantity of a substance and an individual measurement result. In other words, we need to know both the limit of the blank (LoB) and the limit of detection (LoD) [CLSI. Protocols for Determination of Limits of Detection and Limits of Quantitation; Approved Guideline. CLSI document EP17, CLSI, Wayne, PA].

The lowest limit for an assay is the LoB, defined as the highest value we expect to see from a series of measurements on a sample that contains no analyte. The true concentration of the analyte in the sample is zero. The LoD is the actual analyte concentration at which a test result is likely to exceed the LoB and is, therefore “detectable”.

Many of us take a shortcut to determine LoD by measuring a “blank” sample multiple times and calculating LoD as the mean + 3SD. Unfortunately, as intimated in the CLSI document, this estimation does not allow us to differentiate a “true” analyte quantity. It is best to follow the CLSI recommendations and to help with the process I have prepared Excel spreadsheets to help with the data management and calculations. First, let’s review CLSI recommendations.

To determine the LoB, we need to assess the variability in results for “blank” specimens—specimens that do not contain any analyte. The LoB is the concentration or value that indicates the absence of analyte with a defined uncertainty, i.e. 95% probability.  The CLSI equation is:

where Cβ is a correction for the biased estimate of the population standard deviation (SD) due to sample size:

If values less than zero are not reported or the results are non-Gaussian, a nonparametric 95th percentile can be calculated instead.

The experiments to determine LoB and LoD should include all sources of variability: multiple instruments, if available, two or more reagent lots, two or more calibrator lots or recalibrations, and multiple operators over multiple days.

CLSI recommends a minimum of 60 measurements for the parametric calculation of LoB, but for nonparametric calculation of the 95th percentile 120 replicates is recommended. Ideally, blanks (for LoB) and samples (for LoD) should be commutable with natural patient samples. For example, for drug assays, it is best to use drug-free plasma specimens than to use saline or a buffer solution. In fact, multiple plasma specimens would be better than a single specimen. For some tests, samples stripped of the analyte will maintain the original sample matrix such as serum or plasma, but if this is difficult, normal saline or buffer may be a reasonable compromise.

To determine the LoD the samples must contain a small amount of the analyte of interest. LoD is defined as the value or concentration where only five percent of results will be less than the LoB (false negatives) and 95% of results will indicate that the sample is present. The CLSI equation is:

This equation is similar to the LoB calculation in that the SD and Cβ are involved; however, we are not interested in the mean of the LoD sample replicates; only the standard deviation. We are adding this corrected variability to the LoB to determine the LoD.

For the LoD experiments, multiple samples with relatively low analyte concentrations are recommended. I suggest using several samples that are about two-fold to four-fold higher than the LoB. If the SDs are similar you can pool the data, but SDs often increase with concentration. You may want to select the SDs from the lowest concentration samples for the calculation. However, trial and error (and repeat experiments) may be necessary to gather data from the most suitable samples.

Using the LoB/LoD Excel Worksheets should be straightforward. There are two spreadsheets for LoB—one for replicates of a single sample (k=1) and a second for multiple samples. Remember to enter the correct “k”. The LoB is calculated individually for each sample, but data can also be pooled. Nonparametric 95th percentiles will also be calculated.

I hope you find this information and the spreadsheets useful for your method validation experiments. Here is a link to a Google Sheets version of the spreadsheet. To make a copy for yourself, just click the link, hover over file, and select “make a copy.”

Please let us know if you find it useful. 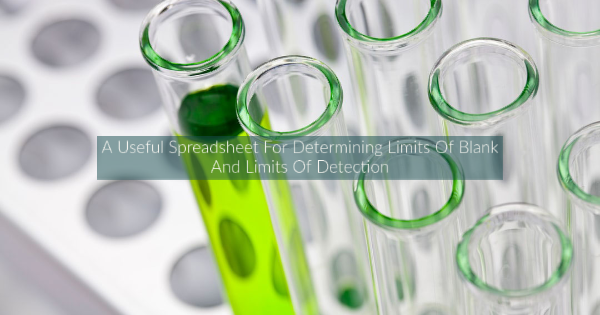 What are the Assurance interference test kits?

The Best In Vitro Diagnostic System Designed Only For You

While we have a line of specialized products for the In Vitro Diagnostic Industry, we welcome opportunities to work with fellow scientists in conceptualizing, creating, and perfecting even more production products. Our goal is straight forward: the advancement and improvement of medicine.

With multiple distribution centers and a mind at the growth of scientific study and test verification, we have custom solutions for complex scientific studies. What can we help you accomplish?